The goal of this post is to carefully look into four of the top rated pocket diapers today. Charlie Banana, used by my daughter for 33.5 months until now, and the other three, Imagine Baby (used for nine months and counting), the Bum Genius (which was already too tight since last month) and Rumparooz which my daughter have already stopped using since 7 months ago.

My daughter is currently 39.6 pounds and 36 months.

At the end of this article, I hope I would be able to help you decide, which of the four is best suited for your needs.

Size Adjustment On The Thigh Area

Imagine Baby, Bum Genius, and Rumparooz uses the button system to adjust the opening of the waist and thigh areas. You need to look at using the third row of buttons to start adjusting the thigh area. 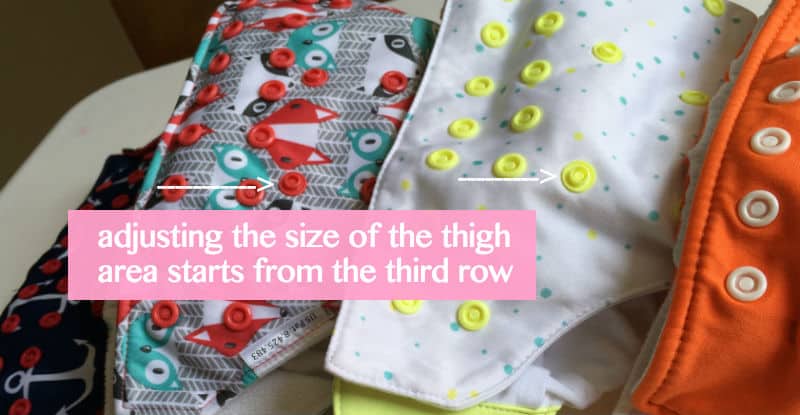 While the three offer the convenience of effortlessly changing from one size to another, Charlie Banana uses a strap system for you to adjust the thigh area. It is located inside its pockets and adjusts like how you would normally adjust a bra.

After using Charlie Banana for more than two years now, the straps can be very hard to adjust. You need to exert some serious effort to get the correct size you need. I had to use my teeth initially to help it move!

I give one point each for Imagine Baby, Bum Genius and Rumparooz for size adjustment for the thigh area.

Unaligned Buttons In The Waist Area To Avoid Leaks 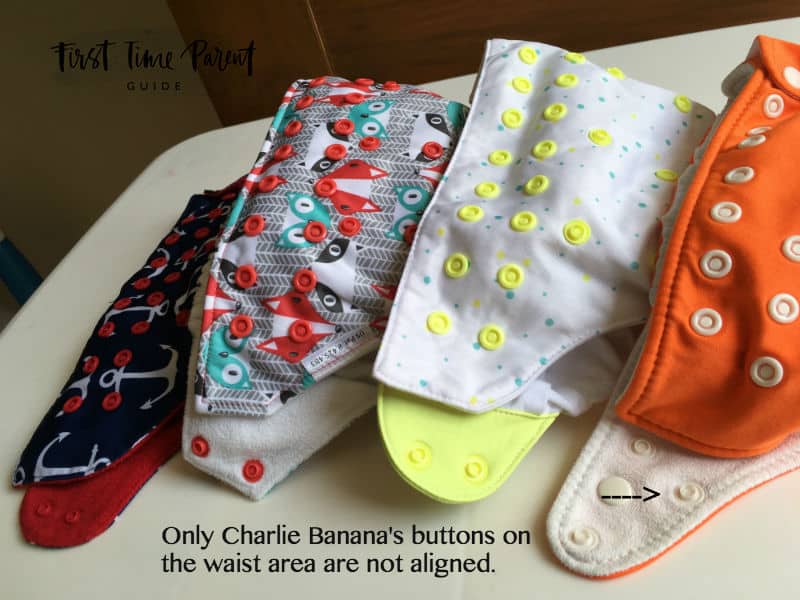 See the smallest settings. Look at how small the thigh area of the Rumparooz can get. 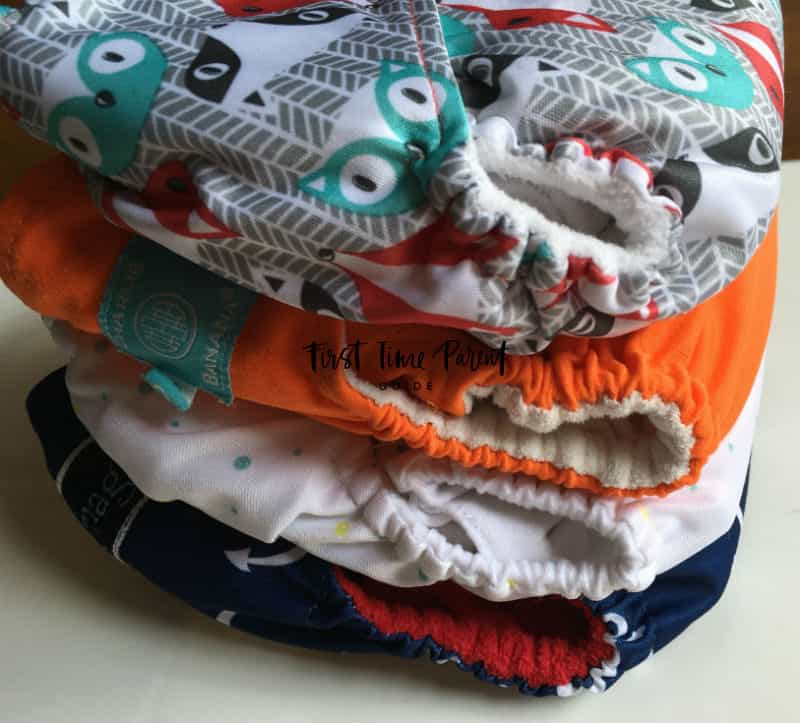 Rumparooz has one newborn insert inside the pocket as well as the Bum Genius. Charlie Banana has one small insert, while Imagine Baby has the same insert you will be using regardless of your child’s age.

One point for Rumparooz as the best fit for newborns.

While Rumparooz can get to be the smallest, it also is the bulkiest mainly because the newborn insert is thicker than the rest. Bum Genius is the least bulky of the four.

One point for Bum Genius for being the least bulky of the four.

COVER – Can It Grow With Your Child?

We have stopped using the Rumparooz cover nearing its fourth month because it is already impossible to fit on to my daughter. From first using it when she was 31 pounds, she was 33 pounds when she outgrew the cover.

As I have expected, the next in line that gave in size-wise is the Bum Genius cover. Such a waste since it is very reliable in terms of absorbency.

Charlie Banana will become tighter next, I guess. But unless my daughter remains at her current weight to until 3-5 pounds more, she’ll miss her favorite diaper.

The winner for the biggest size is the Imagine Baby. There is still a lot of room for adjustment, and hopefully, I would be able to use it until the end of my cloth diapering journey. 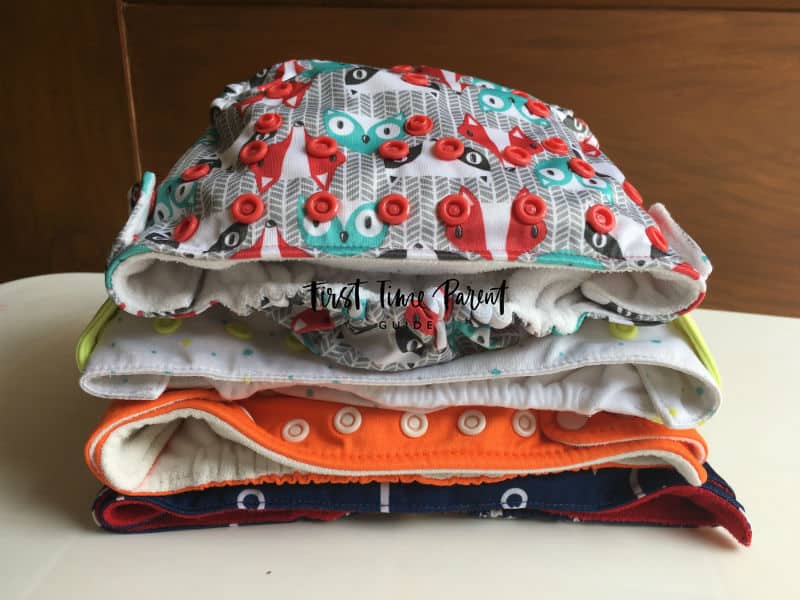 Let me trace the source of the leak to begin with. It is not only because of lack of gussets. Bum Genius has no gussets and so far hasn’t leaked at all.

The leak I realized is because, one, I have placed too many inserts making it too bulky. The bulk would cause an opening on the inner thigh area and the tummy area, and therefore it would leak. Best practice is that, if you are tempted to add more insert to boost absorbency, make sure that the inner thigh is still enclosed as well as the tummy area doesn’t bulge open.

There are times when the leak would come from using only one button each on the sides. The four covers are designed to be tightened using two buttons each. If you use only one on each side, the inner thigh area would again be too lose and therefore leak.

Just avoid these common mistakes, and you will have a leak-free experience with the four covers.

I am giving the point to Imagine Baby for this area. Please take note that although all of them are reliable in terms of the leak, I have to choose one which has more room for adjustment on the waist area. During the months that my daughter almost outgrew the Charlie Banana covers, we were only using one button on each side, therefore has the inner thigh part almost unsecured. The Rumparooz and Bum Genius, during the days they felt a little tight, we would only use one button on each side as well – giving the inner thigh area a room to breathe and therefore, a chance to leak.

Because the Imagine Baby cover is LARGE enough, we have no problems so far utilizing the buttons to keep all the sides and thigh area securely intact.

All four of them usually take less than a day to air dry after spinning. The fastest is the Bum Genius because it is the lightest and thinnest of all. Followed by the Charlie Banana, Imagine Baby and lastly, Rumparooz covers.

Gone are the days when we equate thickness to being more absorbent. BUM GENIUS is surprisingly the most absorbent of all. Take note that it is the thinnest of all, too.

While I have to commend the three other inserts for having good absorbency as well, the next in line to being the most reliable is the Rumparooz inserts, which happens to be the thickest of the four.

Charlie Banana is at par with Imagine Baby, but take note that we are talking about two 33.5 months old Charlie Banana inserts versus one piece of 9-month-old Imagine baby insert.

It is no surprise that Bum Genius inserts get to dry first. They are so thin they would only take a day to less than a day to air dry after spinning. Imagine Baby is the next thinnest and next to dry. Followed by Charlie Banana inserts and lastly, the Rumparooz inserts.

The cheapest is the Imagine Baby pocket diapers. For USD 12.95, you get the cover and a piece of an adjustable insert. Pay for USD 16.95, and you’ll get a Bum Genius and have an extra newborn insert apart from the adjustable insert. Charlie Banana is priced at USD 21.99. It also comes with two sized inserts (small and medium/large). Rumparooz pocket diaper is the most expensive of the four. For USD 25.95, it is double the price of Imagine Baby. To justify the price, just look at the added insert that it comes with.

Bum Genius pocket diaper has one year warranty for snaps, lining, closures, elastic and waterproofing. Charlie Banana’s cover snaps have a year, while its elastics get six months. Rumparooz offer elastics warranty for three months, stitching and seams for six months and a winning lifetime guarantee on its buttons! While the three provide a decent amount of time to cover your cloth diapers, Imagine Baby only gives two months for covers seams, stitching, elastics, or any other sewing defects.

Here’s how the four diapers scored on the different areas of concern above. 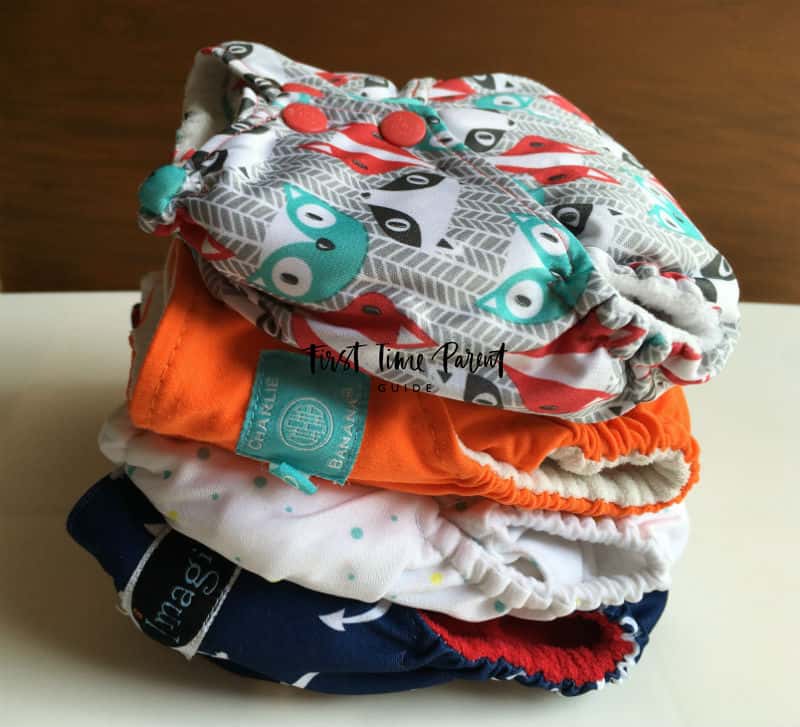 From the looks of the table above, it seems that Bum Genius pocket diaper gets the most points. Being the next lowest-priced of the four, it is a good deal that it still comes with a decent warranty for a year on snaps, lining, closures, elastic and waterproofing. By the time it is out of warranty, you have already saved a lot instead of you went for disposables.

I would love to say that, yes, get Bum Genius if a pocket diaper is your cup of tea. BUT having used it for my toddler who seems to be still needing cloth diapers for the next one year, Bum Genius pocket diaper is no longer usable by then size-wise. My daughter is already 39.6 pounds, and it is already too tight for her.

Should I tell you to get Imagine Baby instead since it is the most possible to grow with your toddler and it got the next highest score, not to mention that it is the cheapest of the four, too?

Well, look at the two months warranty. If you are adding this to your baby registry, it will already be out of warranty in the early days or until the second month of your little one. Is it fine to deal with broken snaps and elastics by yourself long before your child can accomplish a few milestones?

While Rumparooz gets the next highest score, I am sure that I will not be getting another piece of their pocket diaper. Aside from being the most expensive, it was the first to say bye-bye size-wise. And had I not given it a good stretch using a baby hanger, it would not have fitted my then 31-pound daughter from Day 1.

Charlie Banana surprisingly got the lowest score of all. Having been a reliable cloth diaper for more than two years, it amazes me how it didn’t stand out compared to the three other cloth diapers.

Clearly, a high score isn’t everything. Every time you see a high-rated cloth diaper, ask yourself, what area does it excel? Where does it lack? Is the high-rated feature what I am looking for?

Which Of The Top Rated Pocket Diapers Get Your Vote?

Check Out My Review Of The Charlie Banana Pocket Diapers.

Check Out My Review Of The Imagine Baby Pocket Diapers.

Check Out My Review Of The Rumparooz Pocket Diapers.

Check Out My Review Of The Bum Genius Pocket Diapers.

Let me know in the comments section if you have any questions.

END_OF_DOCUMENT_TOKEN_TO_BE_REPLACED
Read More
Parents’ Take On The Baby Trend Trooper 3 In 1 Convertible Car Seat
We use cookies on our website to give you the most relevant experience by remembering your preferences and repeat visits. By clicking “Accept All”, you consent to the use of ALL the cookies. However, you may visit "Cookie Settings" to provide a controlled consent.
Cookie SettingsAccept All
Manage consent