Things I love And Hate About The Grovia Cloth Diaper

The Grovia cover came weeks ahead of the Grovia soaker pads when I ordered it from Amazon. My first impression of the cover is that it is LARGE enough for my then 31-pound toddler. I used the third to the furthest button on both sides, which gives it an excellent chance of growing with my toddler until the day I successfully potty-train her. Read more to learn what I love and hate (mostly hate, LOL) about the Grovia cloth diaper. 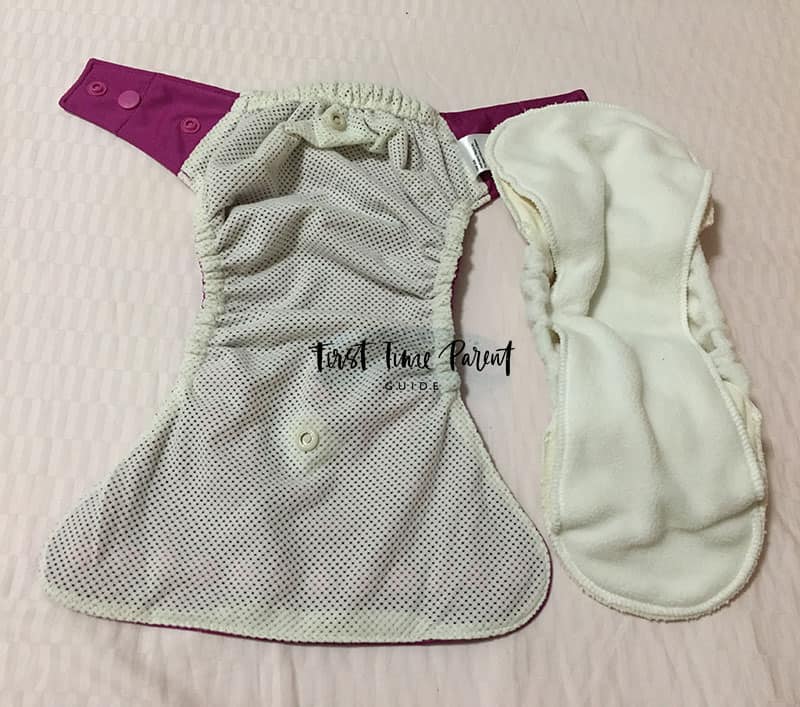 When it is your first time using this combo, snap the two buttons on the second row with the lowest row to get the smallest size. Keep them unbuttoned to get the largest size. See the photos. 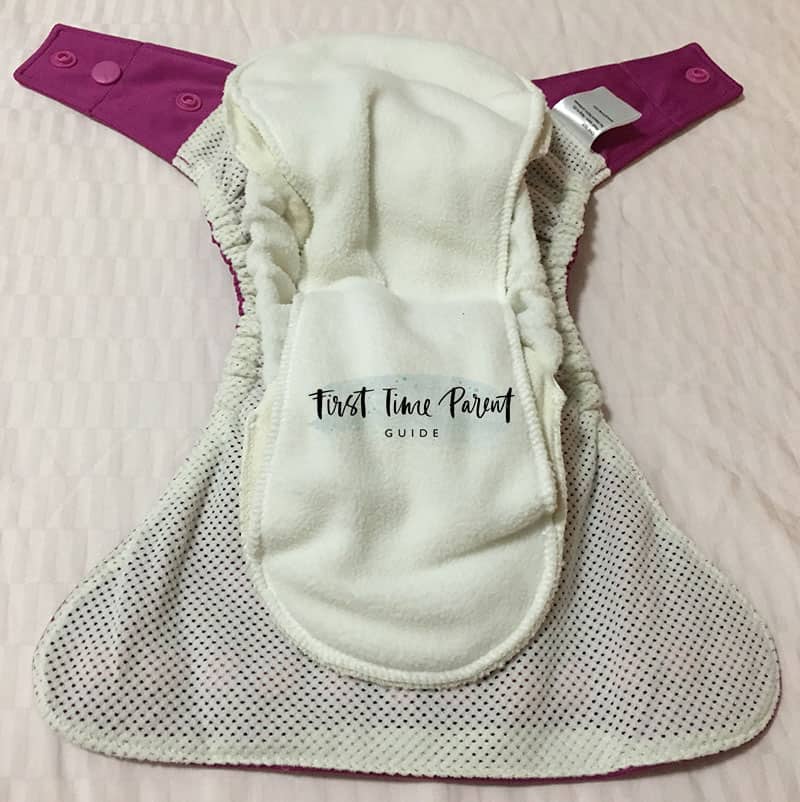 When you are using the largest size, the soakers fit nicely on the cover, however, using the same soakers on the smallest size gives you a weird setup. The soakers are supposed to be one-size, but they are too big for the smallest setting of the cover.

I have a few problems with the Grovia Stay Dry Soakers. First, it takes very long to dry. The first time I washed them together with my Best Bottom overnight inserts, I was expecting the latter to dry longer since it was way thicker than Grovia soakers. But I was wrong.

The Grovia Soakers “layers” make it difficult to dry the different parts of it all at the same time. Also, there is a feeling of “dampness” on the inside part of the Grovia Soaker layers even though I have allowed them to dry for two days! And when I reached the third day of letting it dry, my expectation about its absorbency is already very high. It sure must be something worth the wait.

The Soakers, after 1-2 hours are all soaked up (and therefore the covers and our bed, too!). I wanted to give it another chance and so I gave the absorbency a boost by adding an extra insert. I have tried the Charlie Banana insert, Rumparooz soakers, as well as the Naturally Natures Charcoal Bamboo on top the Grovia Stay Dry Soakers. But it was useless. After the added inserts are all soaked up, the Grovia soakers are more soaked up – and we never fail to get leaks with this cloth diaper cover.

I guess they are only good for newborns since they are so useless for heavy-wetter toddlers.

Being an All-In-Two system, I manage to use different brands of inserts I have in my stash while waiting for the Grovia soakers to arrive. The combinations I tried is

Regardless of what combination I tried, I have one problem with it – the covers are NOT WATER REPELLANT and NOT WIPEABLE, which defeats the purpose of being an All-In-Two diaper.

When parents go for the All-In-Two way, they probably have one goal in mind – and that is TO REUSE THE COVER as long as possible. The Grovia cover is made up of a mesh which quickly gets wet and therefore, cannot be reused as long as it’s already wet.

I wanted to return it, but shipping it from Singapore back to the US is too much of a hassle. I would like to think that I can use the cover as a swim diaper instead because that is what it says on the label.

To be fair, the Grovia cover is one of the most comfortable covers we own. The size if way bigger than the rest of the different brands in our stash, but that’s about it.

The quality of the cover is above average. The seams are sewn professionally and the materials used is very soft and therefore breathable and comfortable. The soakers, however, is made of cotton-blend and Hemp – yes they are soft, but they don’t serve the purpose of absorbing enough liquid. 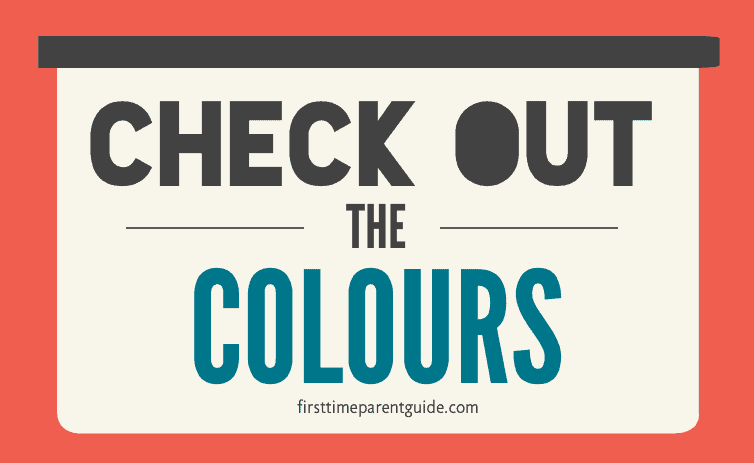 How To Wash the Grovia Covers and Soakers

As a general rule, bleach and fabric softeners are major NO-NOs. Unlike other cloth diapers which permit additives such as baking soda, Grovia doesn’t allow any form of additives. That is vinegar, essential oils and other boosters apart from the above mentioned.

Machine washing and spin-drying as well as air-drying is what we do. I can imagine that line drying under direct sunlight would help speed up the drying time especially with the soakers.

This All-In-Two (AI2) cloth diaper is not bulky. The cover can grow with your CHUNKY child until potty-trained and dries fast. It is also made of soft and comfortable materials. However, the cover is not wipeable and therefore cannot be used the second time around. The soakers’ absorbency is below average and takes longer to dry compared to most inserts I have tried. It is supposed to be All-In-Two system but functions just like an All-In-One diaper.

The saying “first impressions last” is not applicable for this particular diaper we own. I love how it comfortably fits my toddler. And the fact that I didn’t have to force the cover to stretch using a baby hanger, is a plus. The first time we used it for my then 31-pound toddler, it looks so comfortable and breathable. We even used it once for less than 2 hours out of the house without leaks. Right timing in my opinion – my daughter was too busy to take any liquid.

But the first good impressions were replaced with nothing but complaints and utmost hate when used with the Grovia Soakers. The soakers never failed to disappoint me. BUT I still used them last night (for the last time I guess) just to give them a last chance. Upon checking my daughter’s nappies after 2 hours, our bed covers were not the only thing that is soaked; it even soaked the lower part of my daughter’s top.

Upon seeing it, I said, “I knew it!” My husband said, “Knew what?” And I said that “I knew this would happen.” Then he asked, “Then why did you still use the diapers then?” And I said, “I wanted to give it another chance before I write my verdict in my review,” LOL.

I am officially not using the soakers anymore.

My 36-month old toddler (39.6 pounds) still comfortably fits in the cover. She can still use it as “training pants” and still has a lot of room for adjustment. That’s the only consolation I have right now.

See What Other Parents Think About The Grovia Cloth Diaper

Feel free to leave any comment if you have any.

END_OF_DOCUMENT_TOKEN_TO_BE_REPLACED
Read More
Parents’ Take On The Baby Trend Trooper 3 In 1 Convertible Car Seat
We use cookies on our website to give you the most relevant experience by remembering your preferences and repeat visits. By clicking “Accept All”, you consent to the use of ALL the cookies. However, you may visit "Cookie Settings" to provide a controlled consent.
Cookie SettingsAccept All
Manage consent