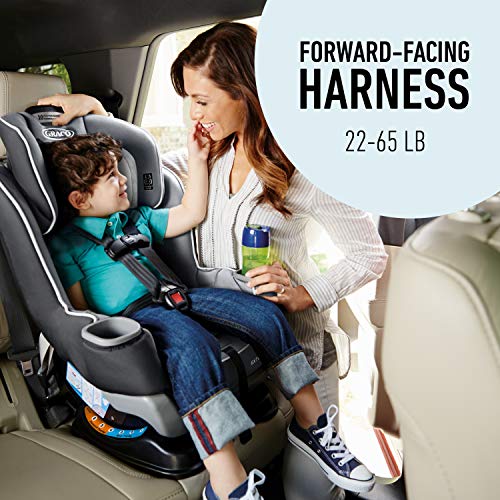 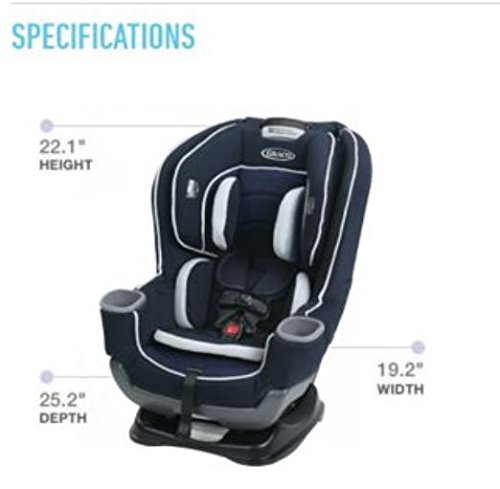 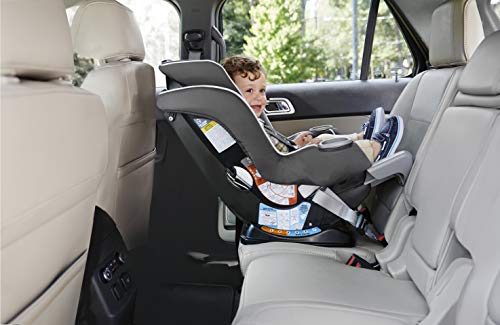 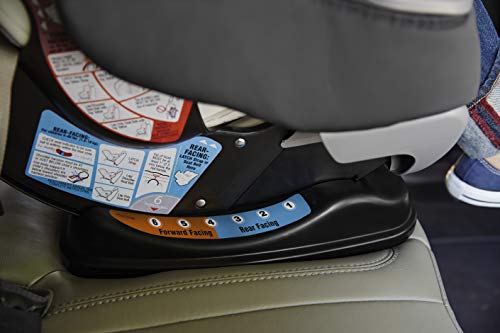 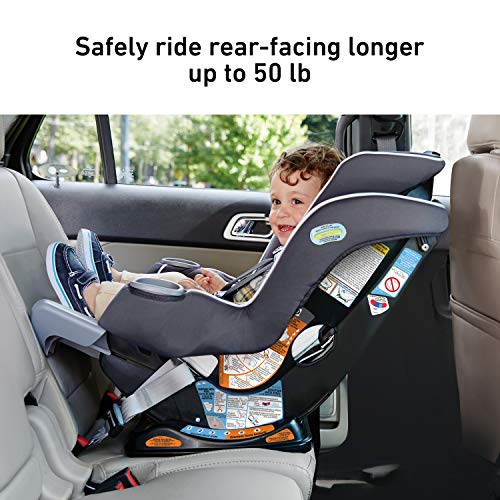 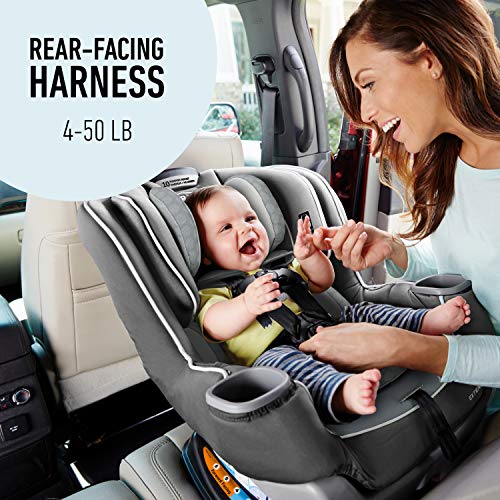 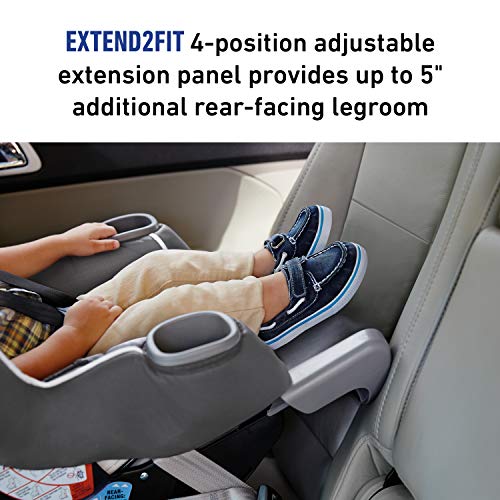 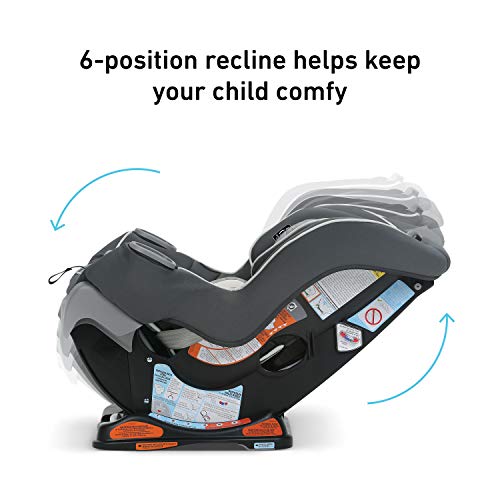 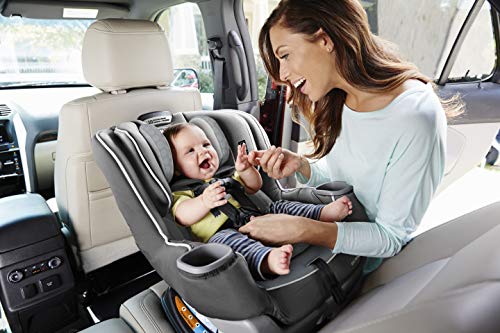 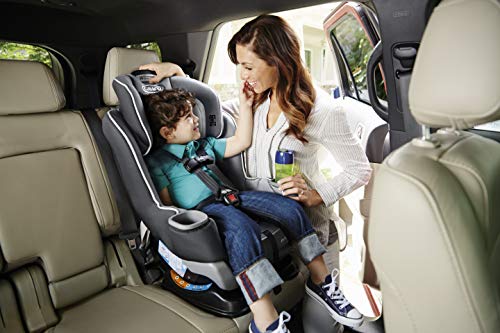 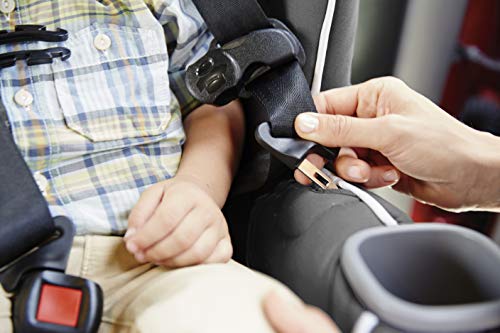 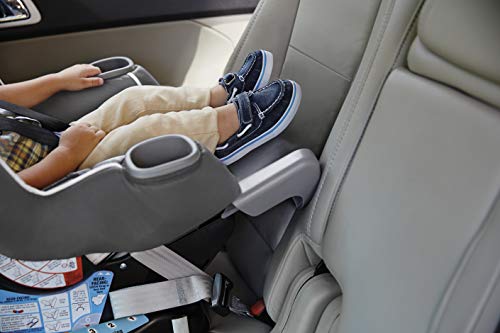 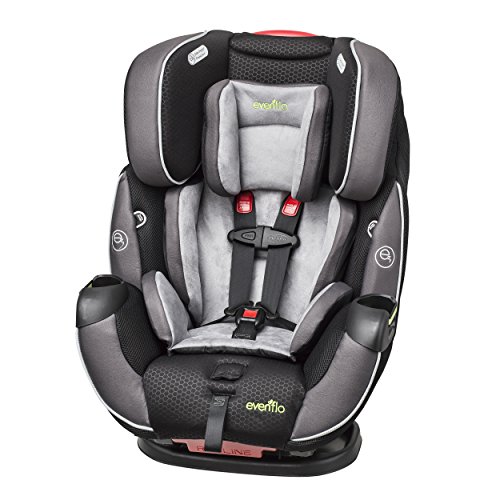 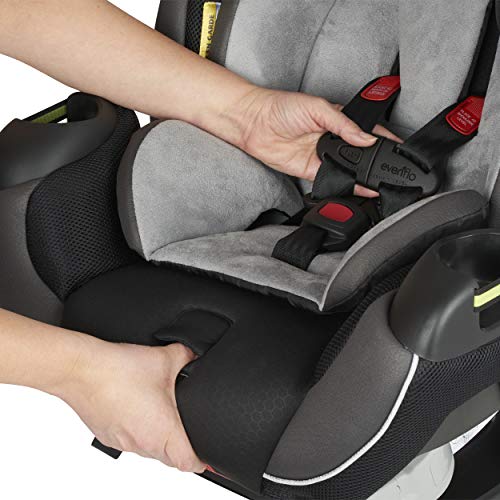 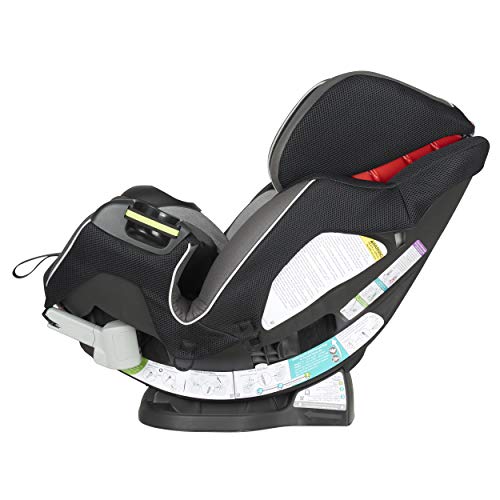 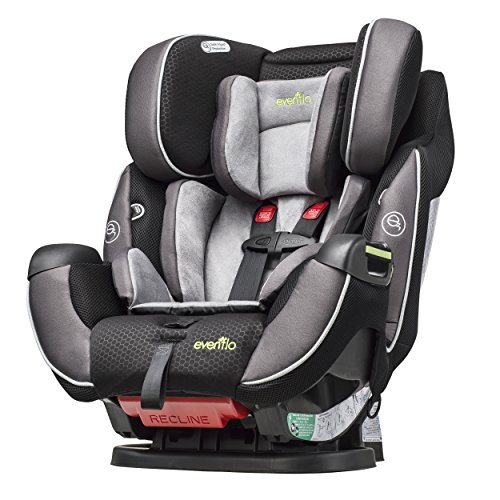 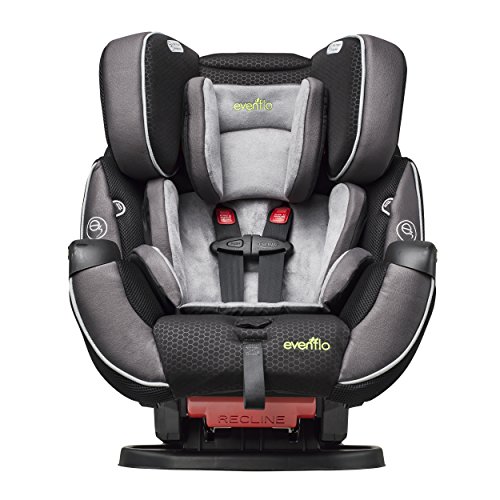 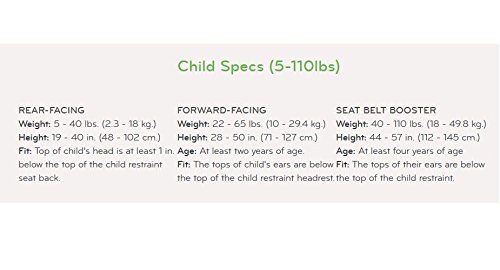 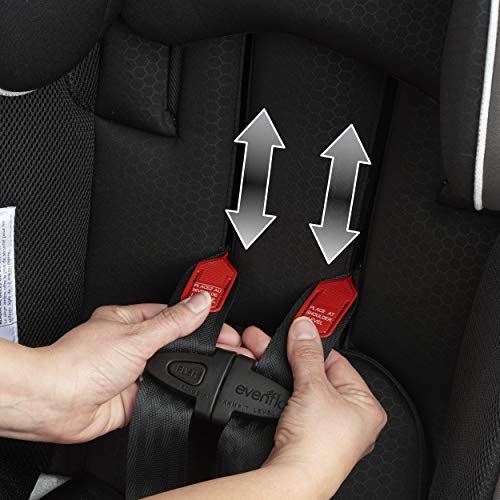 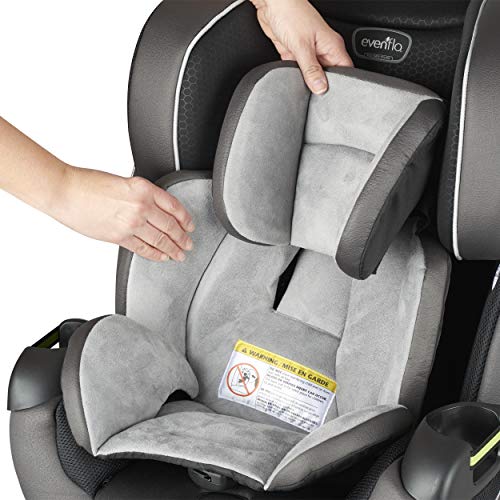 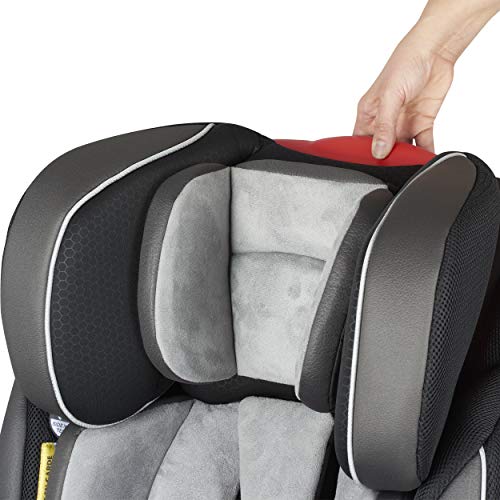 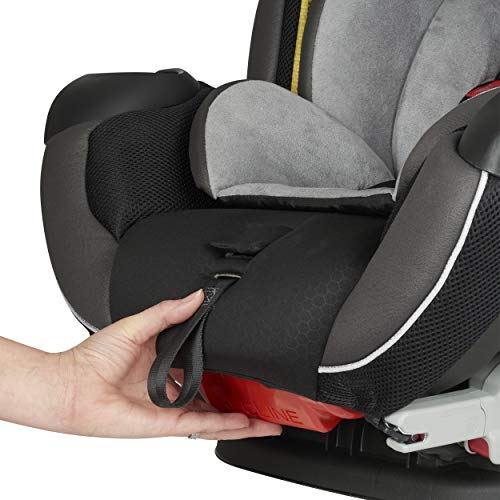 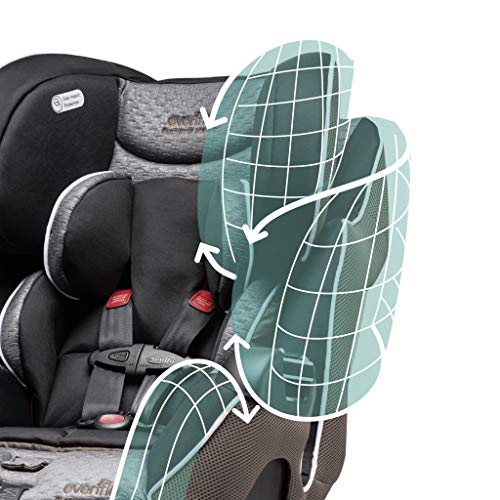 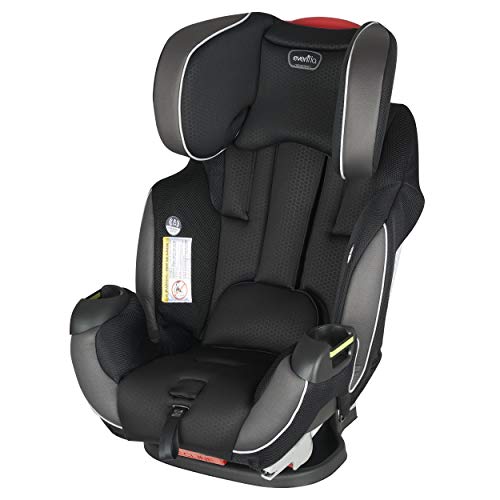 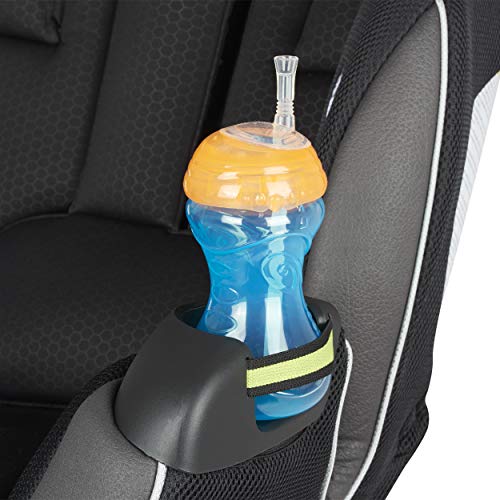 The most distinguishing characteristic of the Graco Extend2fit car seat is its leg extension panel (basically a tray) that matches its capability for extended rear facing. This leg extension allows growing children to have their legs adequately accommodated.

The first position is the fully retracted default position that can be used by children up to 40 pounds. The remaining is for children above 40 pounds.

As a convertible seat, you would be initially impressed by how it can accommodate a tiny baby as light as 4 pounds. In truth, if you put the baby in the Extend2fit seat, they may not be as snug and as safe as you want them to be. The harness will be too high for the child. There would also be more than enough space in the crotch and hip area. Snug fit can only be achieved for babies at least about 7 pounds.

If the Extend2Fit can be used longer in rear-facing, the Evenflo Symphony DLX is well regarded for being a 3-in-1 convertible car seat. It can be used not only in the rear facing and forward facing mode, but also the booster mode. But a primary concern of some parents is that their children might outgrow the seat even before they even reach the 110-pound booster weight limit.

The Evenflo Symphony Elite could then be useful as a transitional seat to prepare the child in using an exclusive booster seat with no need for 5-point harness. If you have a child whose body built is more prominent or taller than most children, then they could quickly outgrow the Symphony DLX seat.

When it comes to the fit of the Graco Extend2fit in a car, the emphasis is once again on its 4-position leg extension panel. This feature will need to take up additional space as compared to car seats with no such attributes.

If you are installing in a large vehicle, this would not be an issue. But if you have a considerably smaller car, keep in mind that taller passengers in the front seat will have a decreased legroom when the panel is fully extended.

Thus, an ideal location of the Extend2fit in the car would be the middle of the backseat, only if the vehicle specifications allow.

It is also rather wide, so fitting the Extend2fit in a 3-across setup would not be possible, especially in smaller vehicles.

As for the Evenflo Symphony Elite/DLX, you would not have any issues with it if to be installed as the only car seat in your vehicle. In a 3-across setup, this product is also not a good option.

Also, in the rear-facing mode, the required recline angle of the Symphony Elite will make the seat rather long so the front passenger might not be able to enjoy the leg space during the ride.

According to the Extend2fit manual, a towel, thin blanket or car seat mat may be used, not as an aid to achieving proper recline, but to protect the vehicle seat from getting scratched or damaged by the base of the car seat.

Installation-wise, Graco Extend2fit is generally easy to install in the rear-facing mode, particularly with its InRight LATCH System.

The Graco Extend2fit has no lock-off that aids in achieving stable seat belt installation, but compared to other child car seats with no lock-offs, it is not as shaky.

Installing the Extend2fit in the rear-facing position with the car seatbelt seems to be what makes parents disappointed with their purchase. Threading the seatbelt through the smaller rear-facing belt path and then tightening make this installation mode troublesome.

There have also been reports and issues about how this seat can be a trouble to set up in the forward-facing mode, too. One is that it can be hard to change the belt from the front to the back if you would not remove the fabric cover first. Removing the cover, in itself, is already a duel with the car seat.

The most highly regarded for the Extend2fit seat is forward facing with lap/shoulder belt where you can achieve the most stable installation.

The bubble level indicator of Extend2Fit helps in attaining the appropriate installation level.

The 6-position recline is also one of the things that parents like. There are even four recline positions for rear facing that parents appreciate a lot. Still, for some, the recline angles are not yet enough because their children’s head slumped while sleeping in the Extend2fit car seat.

One thing that might make you think twice in buying the Evenflo Symphony DLX is its lack of the more intuitive bubble level indicator. Instead, it has a line/arrow on the side that you can use for leveling. Add this to the use of pool noodles/rolled towel, and you might abandon it at once. However, if you would read the reviews, many parents have installed the seat accordingly in its proper recline even if they used only the line indicator and jumbo pool noodles.

Just like any other car seats, this product also has a mixed rating from users, but most of them approve its SureLATCH self-ratcheting system (versus the regular lower anchor connectors) that makes installation a lot easier.

Those who did not like the SureLATCH claimed that the straps were too short and that they cannot make them reach the lower anchors. They warned that this SureLATCH might not work on all vehicles. However, there are two LATCH paths, respectively for rear facing and for forward facing, so make sure you will be using the correct one. Otherwise, there is the vehicle seatbelt installation you could use. You could even easily find the belt path through which the seatbelts must be threaded.

Nonetheless, installing this child restraint system with the innovative SureLATCH is quite easy, according to one reviewer whose dominant hand and wrist were damaged during an accident.

You might not like the Evenflo Symphony DLX because of its single recline position for rear facing. An infant’s head might slump forward if the recline angle is not appropriate for them. Even so, this could depend on the angle of the backseat that varies per car brand and model. Again, the pool noodle can help save the day.

Several people are wary about buying something that is made in China, but this positively does not affect the safety features of the Extend2Fit in protecting a child during times of car accidents.

The high ratings for this product came from parents who thank the car seat because it indeed saved their children from severe injuries during their unfortunate experience.

“The best car seat,” is how one parent of children aged 1 and 3 described Extend2Fit because despite rolling over six times at 70 mph, the children came through with no injuries.

Nevertheless, there was at least one parent who took time in pointing out that the warning label of this product is screen printed on the fabric cover of the car seat, which in hot weather could burn a sitting child.

Also, some parents find the chest clip of the Extend2fit to be somewhat clunky. The straps of Extend2Fit are stiff and require a severe amount of effort to be tight enough and even to loosen. The lever release, reportedly, is awkwardly placed. Parents claim that buckling the baby in/out of the car seat is problematic especially in situations of emergencies.

The US-made Evenflo Symphony Elite also earned high ratings because its safety features worked in safeguarding children. According to the parent, someone driving at full speed hit their car, and the impact was on their rear door where her daughter had been sitting.

Their suspension broke, they spun 180 degrees, hit a tree then an electric pole before finally stopping. Through all this, only the giraffe toy dropped and fell, but the daughter was unharmed and was even unaware of what happened.

Graco probably put all of its efforts in designing the extension panel for the child’s legs that other essential features of this seat were seemingly not well thought of.

While there are many color options, there seems to be a faction of reviewers stating that the seat material is not comfortable for kids. Reports have it that children sweat a lot when sitting on the Graco Extend2fit. The fabric weaving is said to be loose that it may not last long and can become dirty quickly. The padding might be adequate, but Graco could have added more to make it more comfortable.

The fabric fails to cover the entire shell and often came untucked. The cover is also too stressful for parents to remove when they need to wash it.

Extend2Fit’s cup holders are square. While you might like it at first for being unique, but you will soon realize that it is not favorable. Given its shape, you may only put small feeding bottles in it, but not the sippy cups. The placement of the cup holders is also far for a child to reach.

The Evenflo Symphony DLX breathable cover helps make most babies feel comfortable and relaxed while sitting. Majority of parents said that they had no difficulty removing the cover for cleaning. The minority who noted that the cover was hard to remove also complained that the padding of their seat and the cup holders broke and was torn apart (maybe because of too much handling as they tried to remove the cover).

The design of the cover is also something that you might like. The fabric on the main body of Paramount, for example, has a classy honeycomb design. Its infant insert and headrest are of grey microsuede while the accent fabric feels leatherette to the touch.

The Symphony Elite’s cup holders also receive low ratings from some reviewers who said that they come off quickly considering the rather low-quality elastic that holds the cup holder in place. Other car seats have cup holders that are entirely covered by elastic.

A few reviews noted about the flimsy headrest side wings and non-adjustable crotch buckle that could render the shoulder straps loose for smaller kids. There are also reports of frayed straps.

Speaking of the frayed straps, one review detailed about how the parent first called Evenflo to ask for more details about the supposed fraying straps. According to her, the company said that the strap issue is not a manufacturing defect, but rodent problem (mice chewed /scratched the straps as they eat crumbs from the foods eaten by the children sitting on the car seat). The parent said she was uncertain about this statement, but still bought the car seat and was happy that she did.

Check Out The Graco Extend2fit Colors

The Graco Extend2fit has the following advantages over the Evenflo Symphony DLX/Elite.

As for the Evenflo Symphony Elite/DLX, here’s what you’ll get.

Between the two, I’d get the Evenflo Symphony Elite/DLX.

The Graco Extend2fit Or The Evenflo Symphony DLX/Elite?

Read My Review Of The Graco Extend2fit 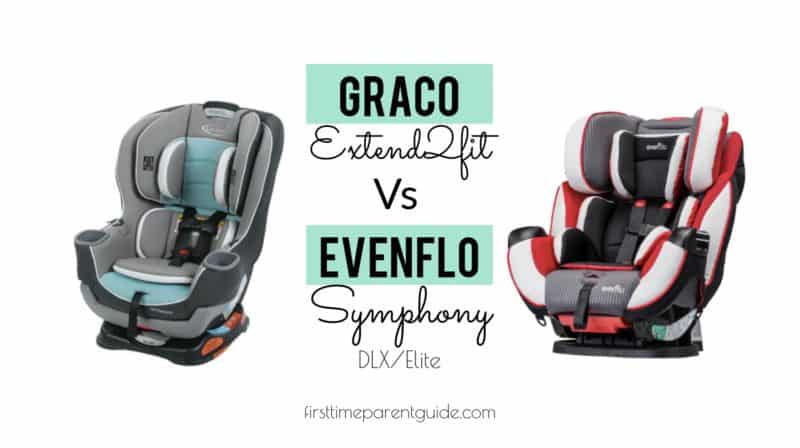