Which one is a better option? 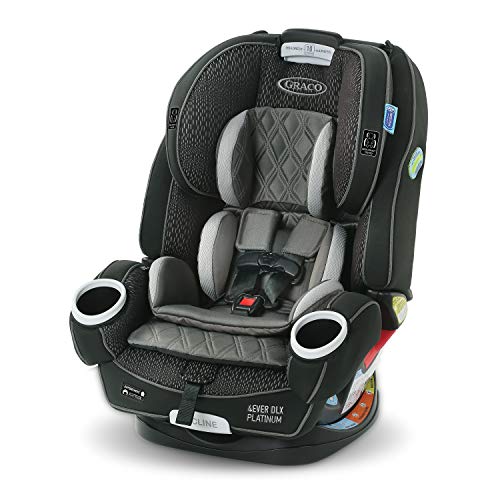 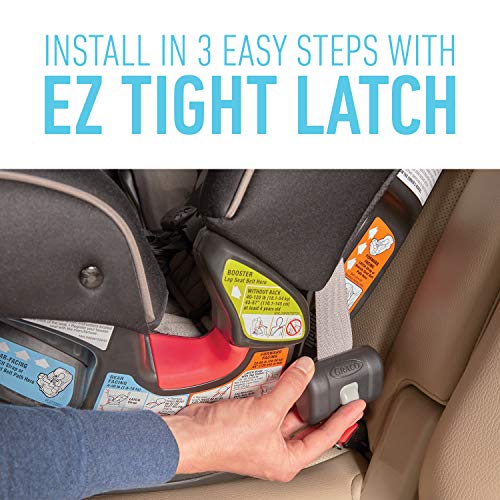 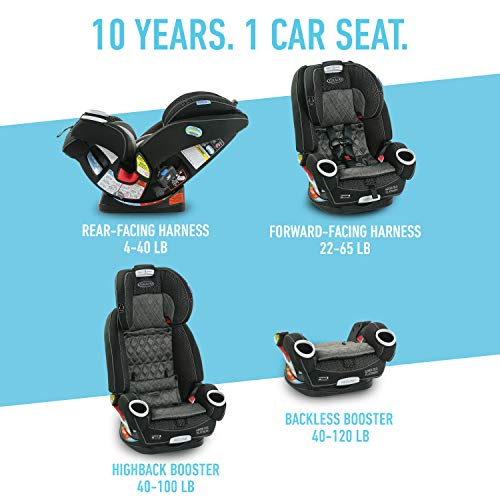 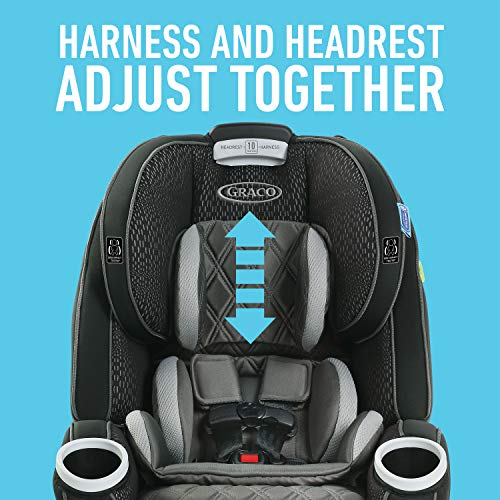 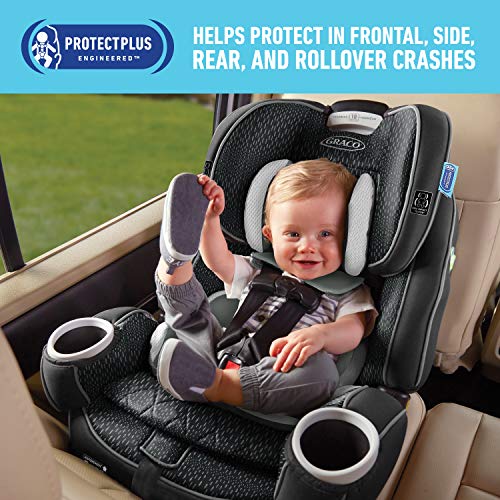 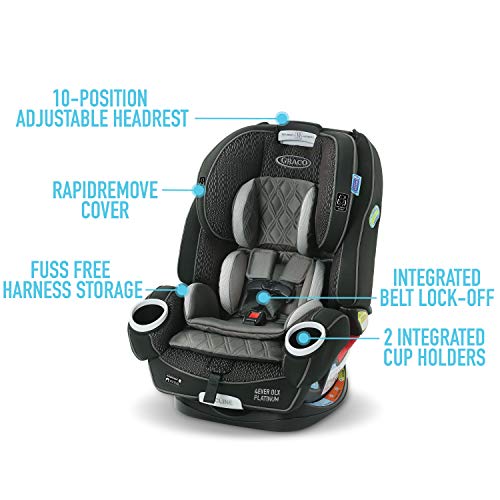 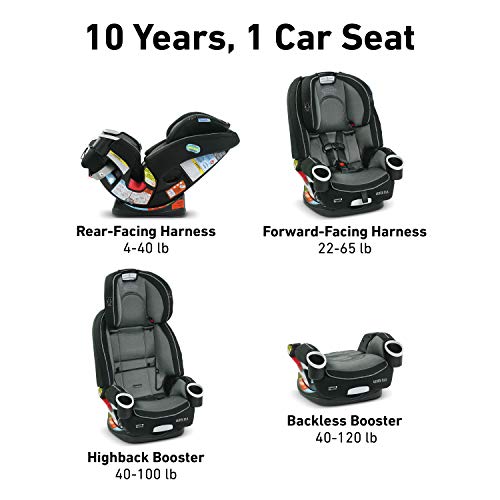 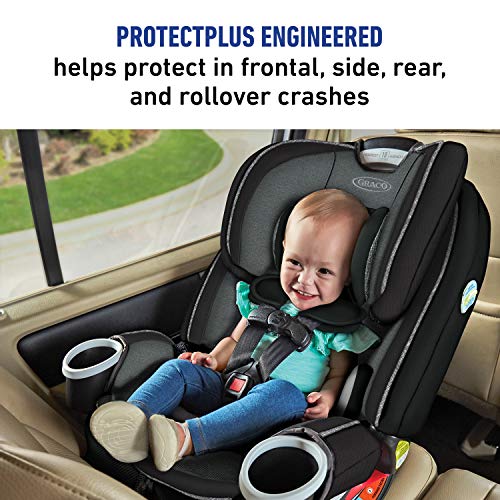 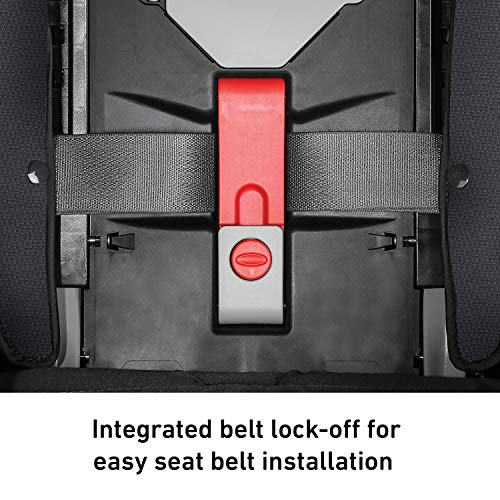 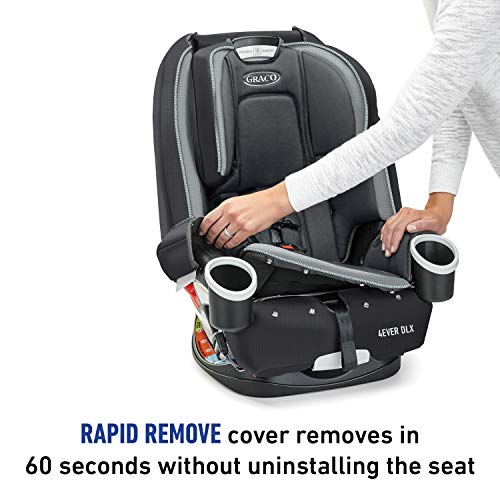 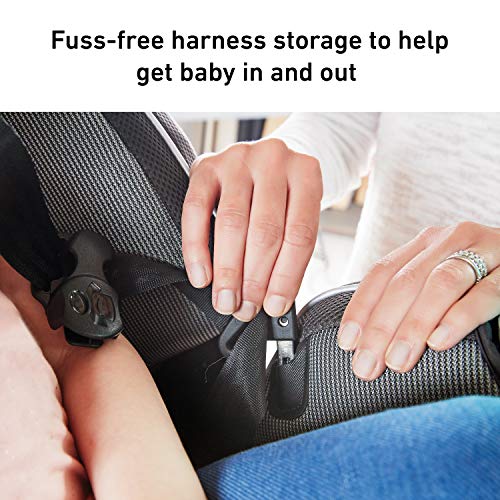 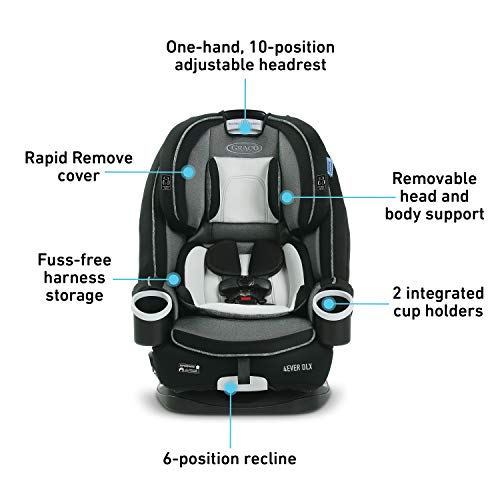 I noticed a minor difference when I visited the respective web page for the DLX and DLX Platinum. 4ever DLX has a Quick Install Guide (wherein it is stated that rear-facing can be used as long as the one-inch rule is followed: the head must be at least 1-inch below the headrest adjustment handle). The 4ever DLX Platinum’s web page does not mention it.

Good All In One car Seats

Neither seat is appropriate for a 3-across setup. You could set up a maximum of two of these seats in the backseat rows of a mid-sized vehicle. In a small car, however, the space for other passengers would become limited.

The 4ever DLX was given a 5-star rating by a reviewer who said that it perfectly fits in their 2016 CRV. Installed in the middle seat, there was still enough room for the front seats to be extended back.

Other reviewers also complimented how they found this car seat to be easily installed in vehicles like GMC Yukon XL and 2007 Ford Taurus.

Like the DLX version, many of the parents who have had the opportunity to try this product have given it high ratings. They said they were able to set up inside cars like Tahoe and Camry without encountering any issues.

Some parents who reviewed this product gave this product high rating as they were able to install it in cars like Camry and Tahoe with no troubling issues.

One parent reviewer said that the DLX Platinum they tried did not fit well in the middle of a Sorento car. Placed in an SUV with three rows of seats, she said that she decided to just install the child restraint directly behind her when they needed it to be fully reclined so that the available space for other passengers would not be significantly diminished.

This is the part where we can visibly see the thin line separating 4ever DLX from 4ever DLX Platinum: the latch system each car seat is equipped with.

Watch how EZ Tight LATCH installation is done in this video.

In essence, the “EZ Tight LATCH” is preferable than InRight LATCH because the EZ Tight system will automatically tighten once you push on the center of the seat. No straps to pull.

This EZ Tight LATCH is a definite superior feature of 4ever DLX Platinum over the basic DLX version of Graco 4Ever that only have InRight LATCH.

The Graco 4ever DLX features the “InRight LATCH.” To achieve a tight and secure installation with InRight LATCH, you need to pull on the strap after the attaching the strap to the lower anchor connectors.  This feature is highly rated by parents who have used the Graco 4Ever DLX (and other Graco products with InRight LATCH). For a visual demo of this latch system, you may watch this video.

Both 4ever DLX and 4ever DLX Platinum can be installed with rolled towels or pool noodles to achieve proper recline angle (as per written in the instruction manuals). However, the available recline angles in both seats are adequate enough in most situations that aftermarket accessories would not be needed.

While installing these products using vehicle seatbelts does not involve the ingenious ClickTight trademark of Britax convertible car seats, there seem to be no significant issues encountered by parents who have installed these two car seats with vehicle seatbelts.

Graco 4Ever DLX Platinum 4-in-1 Car Seat, Hurley *
By
Price: $349.99
(As of: 2020/01/28 6:56 pm - Details
×
Product prices and availability are accurate as of the date/time indicated and are subject to change. Any price and availability information displayed on https://www.amazon.com/ at the time of purchase will apply to the purchase of this product.
)
View now *

They share a set of impressive safety features that can serve as utmost protection for a child during road accidents.

(As of: 2020/01/28 6:53 pm - Details
×
Product prices and availability are accurate as of the date/time indicated and are subject to change. Any price and availability information displayed on https://www.amazon.com/ at the time of purchase will apply to the purchase of this product.
)
View now *

We can see another difference between the two in this section. The 4ever DLX Platinum is additionally padded than the 4ever DLX version. Also, to be sure that you get the most breathable fabric of the 4Ever DLX, avoid the dark colors.

From the product demo of 4ever DLX Platinum, it is shown that this version comes with plush quilted infant body and head supports/inserts.

*A 4-star review of the 4ever DLX claimed that given the price point of the product, it has a trade-off, which is mainly the stitching/fabric. According to the reviewer, the material is not the most excellent quality. It is acceptable, although not terrible.

Color options also differentiate the two versions from one another. The 4ever DLX has more color options than 4ever DLX Platinum, at least as of writing this review.

Now let’s see what you’ll get aside from saving your USD 50 with the Graco 4ever DLX.

Both have been subjected to rigorous testing to ensure they will work effectively to protect the child from danger.

It’s tempting to point you to the one that will provide your child with much better comfort (from extra padding and extra plush fabric) and one that you can install with better ease. That’s is the Graco 4Ever DLX Platinum.

However, the lack of real-life user reviews (Amazon Verified Reviews), somehow tells me to just save my money and get the basic 4ever DLX version, since it has been working really well too, despite the “less superior” LATCH system.

Check Out My Graco 4ever DLX Platinum Review